Roof Blends In With Historic Town’s Architecture Thanks To Sarnafil

A new building in the heart of one of the UK’s only remaining Spa towns has been fitted with a cutting-edge lookalike roof to ensure the property is sympathetic to its historic surroundings.

The building at the heart of Royal Leamington Spa, which will provide vital accommodation for soaring numbers of students in the town, is surrounded by the town’s famous regency architecture and directly facing its railway station.

A registered Sika Sarnafil roofing contractor rose to the challenge of creating an aesthetically in-keeping solution, recommending a single ply system to achieve a traditional look finished with mansards and batten profile.

Project spokesman Alan Mackenzie, said: “We needed to provide a modern waterproofing solution with a traditional appearance and feel. So the first thing we did was change the cold, liquid-applied fibreglass roofing system originally specified to a Sika Sarnafil single ply membrane. Importantly, this allowed us to include the mansards with batten profiles, giving the traditional lead look that was required.”

There were several challenges to the project including a brief to include 85 timber-moulded dormers within the mansard area. “The dormers demanded a very high level of detailing,” added the spokesman. “On each, the membrane was fully adhered to the timber on the curved areas to ensure full adhesion and continuity to all details and areas. It was a time consuming test of our team’s product expertise and high standards of workmanship, but the results are spectacular.”

The project was competed to brief, ensuring the completed building is suitable for its surroundings, while introducing a high performance roofing solution that has a life expectancy of over 40 years. 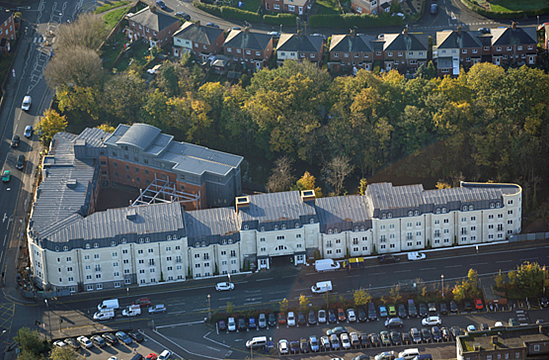