Horticulturists Are Reaching for the Sky in Urban Areas!

Rooftop gardens are the new big thing in urban areas. Just two minutes away from Kings Cross Station in London sits the roof garden belonging to horticulturists David Ferris and Paddy McCawley. Banana trees and clumps of greenery are present within this spacious garden. 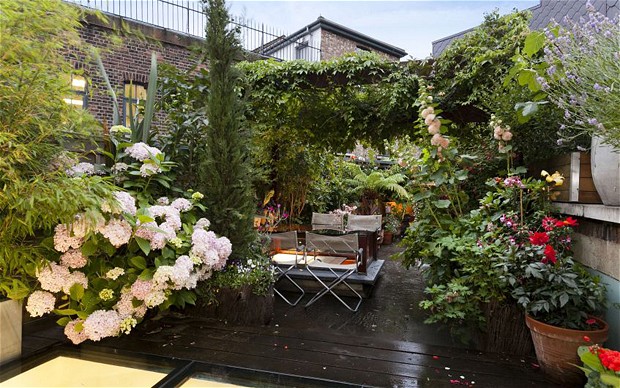 The old building was originally built in 1796 and was a former metal foundry. The chimney vent can still be seen on top of the roof. It’s now a four-roomed house with wooden panelling and creaking steps. Complete privacy is afforded through the magnificent plants in planters at varying heights.

Designing rooftop gardens isn’t easy though. Dan Pearson, a professional designer who has worked in places like Tokyo, said that not every single plant is up to the job. Plants must provide ultimate privacy by making sure that nothing can look in from the outside. He also mentioned that not all roofs can sustain certain plants. Those with big leafs are going to become ravaged by the wind. Smaller plants tend to work better, such as lavender and sage.

The strength of the roof is also something to take into account. Many people will underestimate just how heavy plants can be when they are in bulk. Add in the people who are going to be walking along the roof and it just gets even more difficult to handle.

Managing director Barry Burrows, of Bartholomew Landscaping, commented on a small house that his company had installed a roof garden for recently. He said that rolled steel joints had to be punched through the roof to provide the proper support.

At this point, prices can start elevating to £20,000 as the supports are very costly. Then there’s waterproofing, planning permission, and structural work to be carried out. Being hit with a six-figure bill isn’t that uncommon.

Ian Dobie of St George West London said that the value it can add onto the property is astronomical. Upmarket developers are now adding various different roof extensions as a standard addition. He also said that some penthouses even have bigger gardens than the actual living space.

The popularity behind these roof gardens is said to arise from the fact that many homeowners have had their children move out as they have grown up. Others have moved in and missed their gardens. And some people just want to get more in touch with the outdoors.

Artist and painter Lynn Parotti had the exact same feelings, which is why she moved to an apartment in Kew Bridge. There are views all the way down the Thames and a 2000 square foot roof garden provides unrivalled views of the city. She commented that it allows her to have the natural world around her whilst she paints.

The problem that she had was that her former home had a garden that provided her with inspiration for her elaborate flower paintings, which her new home in its original form just didn’t possess.

There is one problem, however, and that is water. Things like grass can’t be kept on a roof garden as the water will often leak into the living area below. The large majority of modern roofs just can’t handle this. However, the Kensington Roof Gardens, which were built in the 1930s, can do this. The lawns have real grass and seventy-year-old oaks exist in a mere 18 inches of soil. It happens supposedly because of the fact that if the plants are planted whilst they are small they adapt to their own conditions.

The important thing to remember, though, is that nobody should ever attempt to simply place soil on a roof. Waterproof skins and membranes must be put down to avoid water damaging the roof itself. A slope must be erected to encourage rain water to fall off of the roof and into the safety of the guttering.

One example of a roof that had all these precautions in place was the Victorian home in Crystal Palace owned by floral photographer Suzie Gibbons. She took her roof and simply started planting since it was already reinforced with concrete slabs.

The 31cm-thick roof even had steel reinforcements to make planting even the heaviest items possible. Hedges were erected around the edge to make sure that people couldn’t fall off the roof. A small conservatory was also included. However, since the roof garden added height to the roof planning permission was required.